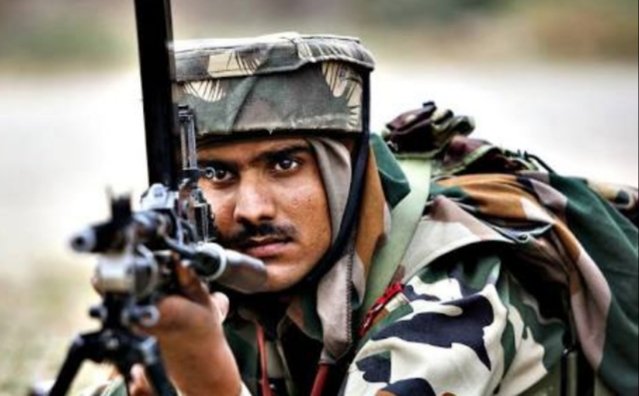 Is he rapacious??
No not at all! he is a martyr.
He sleeps there in the hoarse ground in solitude,
Gazing at the stars, engulfed in thoughts.
Wondering “will I ever see my family?”
He awaits to be held by enraptured mother,
A tear trickled down in pang,
As memories invaded in his mind.
BANG!!
He woke up by a sound startled!
Memories vanished between green mist of clouds.
He stood up ranting his country’s name vigilantly.
Amidst the cacophony of bullets, bombs, shrieks and command,
The only thought that remained is to serve his country.
Aggression made him stronger.
He fought back in rage,
Until a bullet struck his chest
His knees wobbling, he fell on the barren land,
Numb, dumbstruck, grasping to breath.
Triggering emotions blinded him,
He lay there, stupefied, moaning.
Brave soldier winced in pain.
He weeped as puddle of memories flooded,
As he saw his little daughter giggling at the back of his mind.
The smile on his lips was pure and coerced,
That’s all it took to breath his last breath.

He didn’t die because he was a wreck,
Love towards his country emboldens him,
He died with his soul chanting his country’s name.

He kept his promise of returning home,
Sadly placed in a casket,
Wrapped in country’s flag,
Leaving his loved ones devastated,
All that remained was melancholy.

Death can’t cease you to live,
as you live even after dying.